Whenever you hear the word UFO, you associate yourself with the names of movies such as ET or Independence Day. Also you’d realize that it was the period during the 1960s to the 1990s when UFO sightings were the maximum in any cases! But perhaps many of these UFOs were not any sort of machines made by aliens, rather they were made by mankind alone.

According to the latest sources, we have discovered that many of the UFO sightings were nothing but the ‘long kept secret’ U2 aircraft. The CIA has taken up the responsibility behind majority of the UFO sightings. The report, “The CIA and the U-2 Program, 1954-1974,” which had been written by Gregory Pedlow and Donald Welzenbach, clearly states the level of CIA’s involvement in the development of the U-2 spy plane. According to the report “The unexpected side effect of the aircraft was UFO sightings”.

But still many UFO enthusiasts remain skeptical as to how much out of the total sightings were U2s. But then, anything that has wings attached to a tube like body is recognized as an aircraft by any normal human being. How come such an aircraft look like an UFO? And how could anyone explain the fact that pilots of many commercial aircrafts have seen flying objects that were on fire. How can it explain the innumerous reports of UFO sightings that the ATC had received that time?

“[UFO] reports were most prevalent in the early evening hours from pilots of airliners flying from east to west. When the sun dropped below the horizon of an airliner flying at 20,000 feet, the plane was in darkness. But, if a U-2 was airborne in the vicinity of the airliner at the same time, its horizon from an altitude of 60,000 feet was considerably more distant, and, being so high in the sky, its silver wings would catch and reflect the rays of the sun and appear to the airliner pilot, 40,000 feet below, to be fiery objects. Consequently, once U-2s started flying at altitudes above 60,000 feet, air-traffic controllers began receiving increasing numbers of UFO reports.” 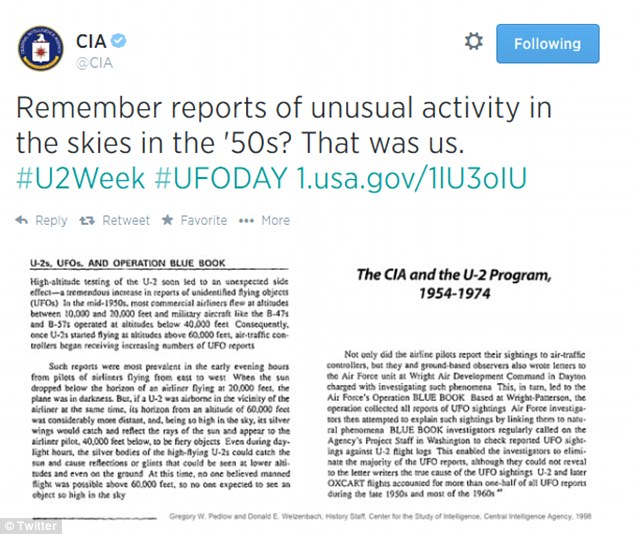 So guys, perhaps it won’t be wrong to say that many of these UFOs were in fact man made machines such as the U2 spy plane but still it would be foolish to rule out the possibility of aliens visiting us!