So long, we have always wondered if there could be life on Mars? And couple of decades ago we had found conclusive evidence that there was indeed life on mars but maybe that was many-many years ago. The fact that mars had water and an atmosphere fit for organic form of life to survive does prove that there was once life on mars.

And until some time ago, when the Mars Rovers had sent an interesting image of a ‘box like’ shape made of wooden (looks like it) lying on the surface of the planet. Now the question arises, What does this mean? Looks like Mars is one of the most interesting planets for the mankind as of present!

This box apparently looks like a coffin. If you do some calculations you would find that the box is somewhat a meter long and about 18 inches in width and height, which makes it look like a coffin.  But perhaps the box was found long before but has caught the attention of the scientific community and UFO enthusiasts recently.

Scott Waring, prolific author of UFO Sightings Daily says “What would it take to get NASA to turn the rover around and examine the contents of this box? … Lots of alien species are short, including a species of greys” 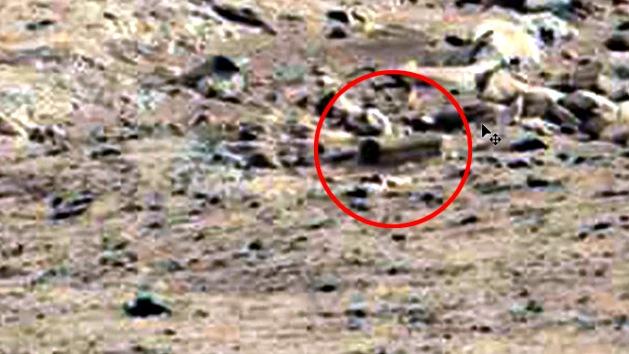 However, if sources are to be believed then Mars Rovers is perhaps facing a problem of its own. This problem seems to be related with the Mars Rovers memory that causes it to lose track of the findings it has made on the planet. Scientists and engineers believe the harsh atmosphere of Mars to be responsible for it.

This might mean the end of Rovers but according to some NASA officials, software programming is being done in order to eradicate the memory problem. The Mars rovers however, keeps on sending miraculous images in huge numbers such that scientists don’t even get enough time to process each and every image. Which is why perhaps the coffin wasn’t bothered about for these many days!

Anyways guys, don’t forget to share the story with your friends…